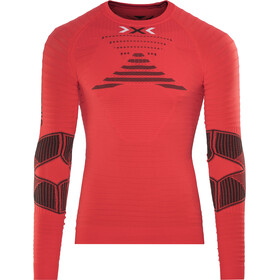 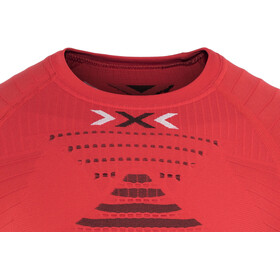 Step beyond the current limits of physics? All clear ahead! Effektor Running Powershirt. The blood in your arms have a tough road back to your heart – long, against the force of gravity and against the centrifugal force created by your arm movement. The Effektor Running Powershirt therefore not only has performance-enhancing X-Bionic Partial Kompression in the entire upper body, but it also increases the compression applied to the arms. The return of venous blood has an easier time of it, and your cardiovascular system saves energy. You gain even more power with the large 3D-BionicSphere System on the back. It relieves your body’s own need for temperature management. Neural-Response-Bandages on the elbows provide for quicker, more precise muscular response.

3D-Bionic Sphere System
Leaves residual moisture on the skin that the body does not interpret as dampness. We have no sensors for sweat. We can only perceive sweat mechanically once drops form and begin to trickle down. Only at that point do we register “wet”. Sweat Traps absorb this moisture before it is felt, drawing it away to be evaporated and disposing of it through thermal dynamics. Only a thin film of moisture remains on the skin. Cooling is of course not possible without moisture.

Expansion Ribs
Expansion Ribs knitted fabric fold apart based on the accordion principle, insuring that cold doesn’t cool down the elbows. Event when sharply bent during activity, the insulating effect is maintained through warm air that is already stored in the interior. The flexibility of this technology and elasticity of the yarn allow for the freedom of movement.

Sweat Traps
Trap perspiration before you start to feel it. Wick perspiration away so it can evaporate using heat dynamics. A film of perspiration – too thin to be noticeable – is left behind to cool the skin. 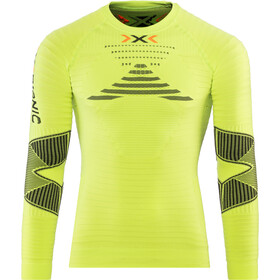